What is Masdar City?
Masdar City is a new city operating on 100% renewable energy and has been designed to create the most sustainable lifestyle possible, located in Abu Dhabi, United Arab Emirates. The streets and buildings are strategically placed close to one another, providing shelter from the scorching temperatures in the Middle East. The purpose of Masdar City is to provide a lifestyle for those who wish to live sustainably (no cars, 100% renewable energy, lower water and energy consumption etc) and to provide a glimpse into what the future of green development could and should look like. The size of the city in 2016 was 6 km².

The future population of Masdar City:
Masdar City is projected to reach around 50,000 occupants in future years with 40,000 of which either being students or professionals, as well as 1,500 green businesses. The city is focusing on luring in young students with its futuristic technology and greater education on sustainable development, illustrated in the city itself. All stages of the city’s construction should be completed by 2025. An additional 50,000 people are expected to commute to Masdar City each day for work.

Why was Masdar City built?
Masdar City was built to focus strongly on emission reduction projects and to demonstrate sustainable development and circular economics on a large scale. Masdar City was also developed to create ultra-large-scale renewable energy projects and to prove that even a city – dependent on many resources – can sustain itself and meet the needs of the population with only renewables.

How is Masdar City sustainable?

Who created the city?
The city was designed by Foster and Partners and built by Masdar. Foster and Partners is the largest architecture firm in the United Kingdom (UK) specialising in integrated design and architecture with its headquarters (HQ) located in London. Masdar (often referred to as Abu Dhabi Future Energy Company) is a large renewable energy company that was founded back in 2006 as a subsidiary state-owned enterprise. The word Masdar means “Source” in Arabic.

The cooling technology:
To counter the hot temperatures of the Middle East, Masdar City has cleverly designed the development to decrease the temperature within the city significantly.
Masdar City is capable of reducing the temperature of courtyards, buildings, and sidewalks by almost 10 degrees Celsius (50 degrees Fahrenheit) because the buildings are strategically placed close together to provide an abundance of shade, with the orientation of the city north-east to southwest minimising the amount of sunlight and increasing the amount of shade. This all plays a part in reducing the overall temperature of the city, however, there is also a large structure in the heart of the city referred to as the “wind tower”. The basic idea of the wind tower is to suck warm air into the system, where it produces cool air onto the ground level.

How the wind tower operates:
At the top of the structure, there are louvers on each angle. When the wind is blowing, one of the louvers will open up to collect the air moving in the given direction while the other louvres remain shut. Once the wind is collected, it is hit by mist jets helping cool down the air. Subsequently, the cool air is sent down a tunnel pointing towards the floor where it reaches the ground level and helps cool the surrounding buildings, people, plants etc. 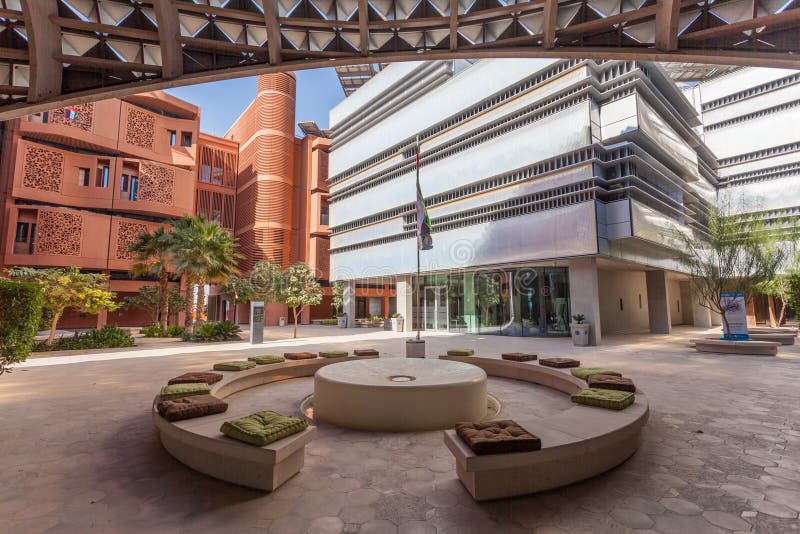 Has Masdar City encouraged more sustainable development?
Whilst Masdar City hasn’t had any direct link to more sustainable development, it has (at the very least) played a role in providing the world with a sneak peek into what new development ought to look like. Masdar City has not only provided governments and companies with an insight into what new cities must look like, but also shows how we can improve many smaller-scale projects like housing, water and energy consumption, recycling and green technology education. The city also demonstrates how we can research, innovate and develop new technologies in an environmentally-conscious way. In part due to Masdar City, more of a focus on green development is occurring in the United Arab Emirates (UAE) with projects like “The Line” in Saudi Arabia for example.

Conclusion:
Masdar City is a true example of what future development must look like. This city has solved virtually all large environmental problems caused in urban landscapes, without making life difficult for the population. If anything, Masdar City has shown to boost the quality of life. Based on the ever-growing need for green development and the brilliant developers in charge of the construction, I have little doubt we will soon see the completion of what is arguably the most forward-thinking city globally, and hands down, the most sustainable.

Released on the 10th of September 2021. -KJDJ
To view bibliography, click here.

One thought on “Is Masdar City a glimpse into the future of green development?”